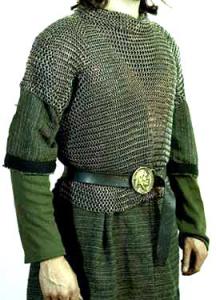 We’re uncertain what a byrnie looked like, but it could have been a mail shirt, or mail-covered leather jacket.

Finally getting back to some text translation today, after time away for travel, conferences, and end-of-term marking frenzies – and I discovered a neat thing I wanted to share. I came across the word byrnwiggende today. A wiggend is a warrior or soldier, and the word is commonly seen in descriptive compounds – rondwiggende, for example. Rond or rand is technically the margin or the edge of something, but it was usually used to denote the edge of a shield – so rondwiggende might get translated as sheild-warrior or shield-bearer.

All of that I knew – but what on earth was a byrn? The Clark Hall dictionary gave me corselet, and that’s a familiar enough armour term, but I didn’t really like the word. I tried the online Englisc Onstigende Wordbōc, to see if it would give me anything different – and it gave me the Modern English word byrnie – at least, they said it was Modern English. I’d certainly never heard of it, so I threw it into google, and out popped the image on the left – something I would indeed have termed a corselet. Or maybe even just a maille shirt. According to Fighting Techniques of the Medieval World (Bennet, M., et al):

There is some dispute among historians as to what exactly constituted the Carolingian byrnie. Relying… only on artistic and some literary sources because of the lack of archaeological examples, some believe that it was a heavy leather jacket with metal scales sewn onto it. It was also quite long, reaching below the hips and covering most of the arms. Other historians claim instead that the Carolingian byrnie was nothing more than a coat of mail, but longer and perhaps heavier than traditional early medieval mail. Without more certain evidence, this dispute will continue. 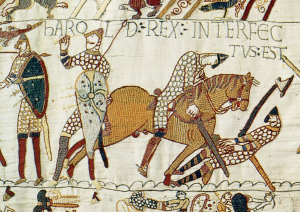 A section of the Bayeux Tapestry – could those soldiers have been wearing byrnies?

There you are, then; a new word for me in both languages. Call them shield-bearers, mail-wearers, or men-at-arms – a good leader was lost without good soldiers.