Last week was all about animals as pets; to wrap up September, we’ll look at what animals the ancient English would’ve eaten for food. For help with that, I turn to Dr. Sally Crawford, a senior research fellow at Oxford’s Institue of Archaeology. She’s written extensively on Anglo-Saxon archaeology and daily life in Anglo-Saxon England; from her, we learn that, in terms of meat,

“Isotopes analysis of skeletons excavated from early Anglo-Saxon cemeteries suggests that the main diet consisted of chicken, pork, beef, and lamb, supplemented by wild birds and some fish. With the rise of Christianity, fish became more prominent in the diet.” 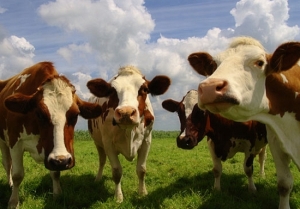 Hi. We just dropped by for dinner.

Starting with the most prominent meat source in the diet leads us to cow, or cú in Old English. A cow specifically intended for eating might have been called a metecú, or meat cow. Speaking of eating, today we would typically use cow to refer to the animal, and beef to refer to its meat. These words are distant etymological twins. Both the Anglo-Saxon word cú and the Old French word boef stem from the Indo-Euroean word *gʷōus *- the Old French word via the Latinate b

s. (These words might all start with different letters, but broken down in terms of linguistic rules and trackable consonant shifts throughout time, it becomes easy to see how they are related. All of these concepts are something that might come up in more detail in the future.) After the Norman invasion, the ruling French nobles and upper class Englishmen would have referred to cows, seen mostly on their dinner plates, by the Anglo-Norman beof, while those of lower status, the ones actually keeping the cows as well as eating them, still used the Old English term. Thus we start to see a distinction between what an animal is called in the field and what it’s called when it reaches the table. The same development can be seen with pigs and pork, chicken and poultry, sheep/lamb and mutton, deer and venison, calf and veal, and eventually snails and escargot.

*A word about Indo-Euroean and Proto-Indo-Euroean: Indo-European is one of the world’s great language families, connecting the languages of Western Europe to Northeast India. Proto-Indo-European is the linguistic reconstruction of the language from which Indo-Europran descends, the common ancestor of all the Indo-European languages. How a language of which there is no written record can be reconstructed is a conversation all its own, and one we might return to at a later date, but for now, what you need to know is that the *asterisk at the beginning of a word indicates that it is a reconstruction from a proto language, put together by linguists as the most probable earliest form of the word. The *asterisk at the end of a word just means, hey, look below, there’s a footnote!

And thus ends September! Themed months are really helpful for me in terms of focusing the blog-specific research I do, so I hope you like them too. Next month’s theme is stories and storytelling – with lots of fun surprises in store. 🙂